I put the word "heirlooms" in quotes because it has a connotation of value which is non-existent in most of the family stuff we have. It has value because of its family connection and not because of any actual monetary worth. Every time I build something, I tell my wife Jan that I am inflicting another "heirloom" on our children.

After the funeral, the kids gather and sort through all the stuff that is left behind. They look at things and ask, "What did he save this for?" Nobody knows and off it goes into the dumpster. But I know why it was saved.

Everything we keep, we keep not for its utility or even its value. We keep most of our stuff because it comes with memories. When you come across it as you clean the basement, you suddenly have a stream of memories that come flooding into your mind that you hadn't thought about in years. Faces, events, relationships, joys and nostalgia all are there. And you know, if that thing is thrown out, you'll never be prompted for those memories again.

You aren't just tossing stuff, you are throwing out a piece of your life. So I say, let the kids do it. They will view the stuff objectively and only keep what has real value and/or memories for them. And that's the way it should be.

But what's the family story behind the stuff? Well, some of that is here and, maybe, someday, someone will be glad to know the background of some of this stuff. At this point I will just put items here in no particular order and sort them better someday. 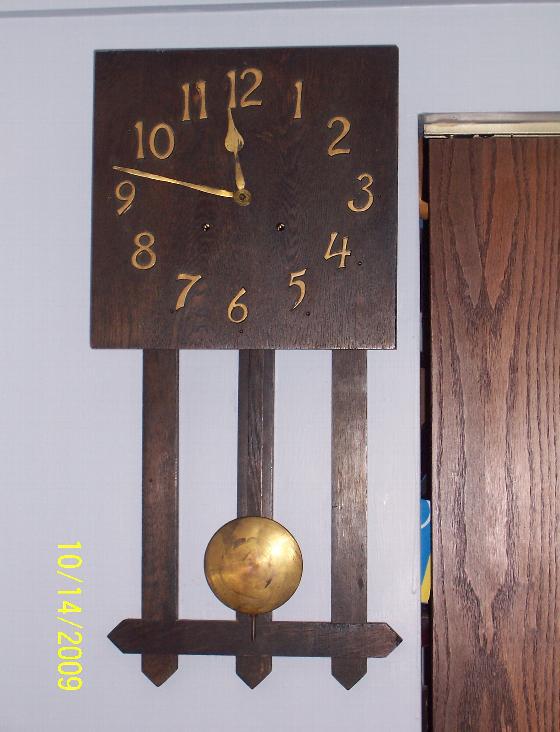 This mission style clock was in a small sewing room off of Roger's (my father's) bedroom in Oak Park, IL. Henrietta (Henny) Concklin (my gramma) put it there after the pendulum support spring broke. Before that it was hanging in the dinning room over the buffet (side-board). As long as I knew about her house Mr. Blunk's picture was hanging in that spot. There are two stories about where the clock came from. The mission style puts it pretty early in the 20th century.

The first story I heard was that it was offered as a bonus if you subscribed to the Chicago Tribune and paid up-front for a year. I was thinking about chasing it a bit and seeing if the Tribune has a record of that promotion and when they ran it.

Before I could do that I mentioned the clock to Elsie-Jane, Uncle Lewie's wife. She said that it was gotten as a premium from American Family Soap. You collected enough proof-of-purchase coupons and could turn them in for gifts of which this clock was one.

I first saw the clock sitting in a shallow box in the sewing room when I was still young. Eventually clocks got my interest and I requested the clock. I don't remember the details of exactly how, but I vaguely remember being pleasantly surprise when Gramma was quite willing to pass it along to me.

The clock itself was not working when I asked Gramma for it. I had it for several years and finally was able to get a new pendulum hanger spring and get it working. It chimes the hour on the hour and on the half-hour there is a bell that rings to signal that milestone. The left key-hole spring turns clockwise and the right one turns counter-clockwise. It is the only clock I have where the springs don't all turn the same direction. It is accurate to about five minutes a week.

The key with the clock is not original because it is configured to service a mantle clock (small socket on back to adjust the length of the pendulum). The time on this clock is regulated by a knurled knob at the bottom that turns to raise and lower the pendulum fob (lower makes it swing slower, higher makes it swing faster). The key is kept handy on the top of the clock. You can't see it but between the clock and the wall is a folded envelope. I put it there because the clock was rocking as the pendulum was swinging and the envelope keeps it steady. 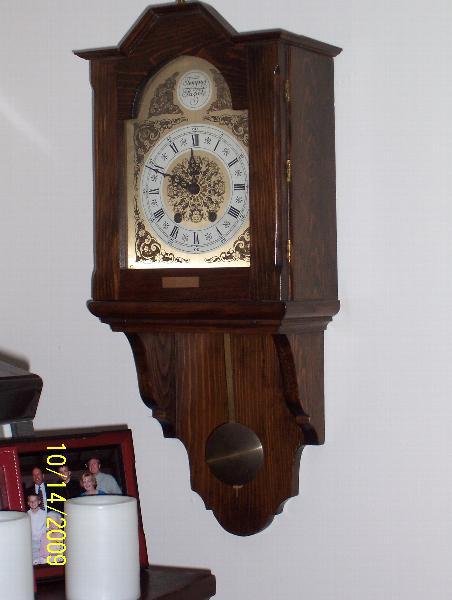 The clock was built during the ministry in Fall River, MA (1970-1973) in the home of Joe Gorman. Joe was an active layman in the church and we hit it off and so did the wives. Among several ideas that sprang up in the fertile minds of the four of us, was the thought of building clocks and candles and selling them. Joe and I were to build clocks and Jan and Nancy were to cast large, decorative candles. Fortunately, neither family had to depend on the income.

I had built a clock for my parents utilizing plans from Craft Patterns. Their home base was less than a mile from my parents house in Illinois and for years they regularly had an ad in the Chicago Tribune selling patterns for various home projects. Just like a sewing pattern, you copied the full size pattern onto wood, cut it out and assembled it using the included instructions.

Most of these were decorative items, small pieces of furniture, back-yard gazebos, etc. When I saw them advertise a clock, I went over to their store to see what they had. I got the plans for a "Wag-on-wall" clock, purchased the works (made in Germany) from them and a clock face with a crystal cover that opened like a huge pocket watch for winding. I purchased a clock face that was larger than the plans required on the theory that the whole point of a clock was the dial, so why not get the biggest one that will fit? The clock presently (2009) still ticks from my mother's living room wall. Maryte, her care-giver keeps it wound and it keeps good time. (When my mother passed away in April of 2011, Robert expressed an interest and the clock is now with him in Cambria, WI)

Knowing it could be done, Joe and I sent for various plans, works, and dials. My memory is fuzzy, but I want to say that we sold one or two clocks. I know one wag-on-wall clock went to a fellow parishioner (Armand Ramos) who used it as part of a raffle prize at work and everyone seemed happy enough with the arrangement.

We had two clocks in process when Jan and I left the ministry in Fall River to take up a pastorate in Everett, near Boston. Joe got the walnut Connecticut mirror clock and we got the pine wall clock. They were both unfinished when we left. Joe finished this one and gave it to us after we had moved.

The plaque identifies the clock as a "Gorklin" clock. We discussed a name for our clock company that reflected a combination of our two names Gor-man and Conc-klin. The other way to blend the names was "Conman" and that seemed to have too many negative connotations. We laughed at that but never put the name on a clock we sold. So it was a surprise when the clock came from Joe with name affixed to the front.

There is a brass filial at the top that did not make the picture. The clock chimes the time on the hour and chimes a single 'bong' on the half-hour. The clock keeps excellent time (within a minute a week) and has worked steadily since 1975. At one point the pendulum was dropped and the time adjustment snapped off. I don't remember how I fixed it, but if something with the pendulum is not original, that's why.